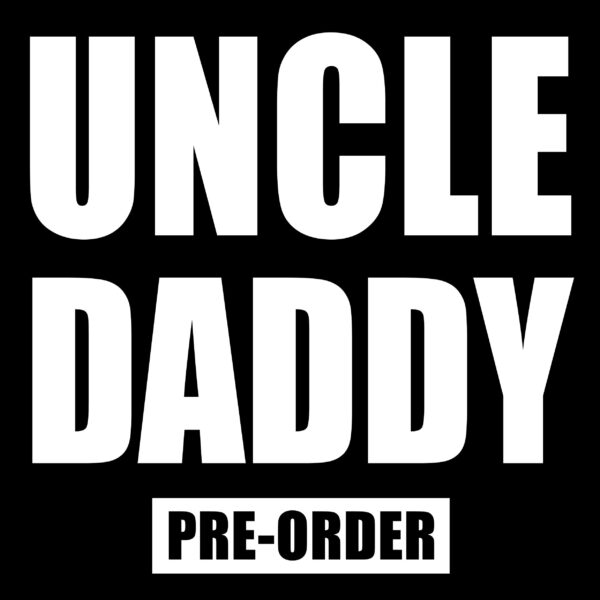 WONK FAM! Great news in these lockdown times… WONK UNIT have been busy recording a new album for your lucky ears. “Uncle Daddy” will be coming Spring 2021…

GET YOUR COPY PRE-ORDERED from our lovely shop. £15 plus postage. Full of punk rock bangers.

We’ve released one of the tracks from the album, STRENGTH, which has a lovely video from our mate Mark Richards;

We hope to see you all soon – back in sweaty venues with plenty of hugs and love. And of course SEXY HOT DANCING! 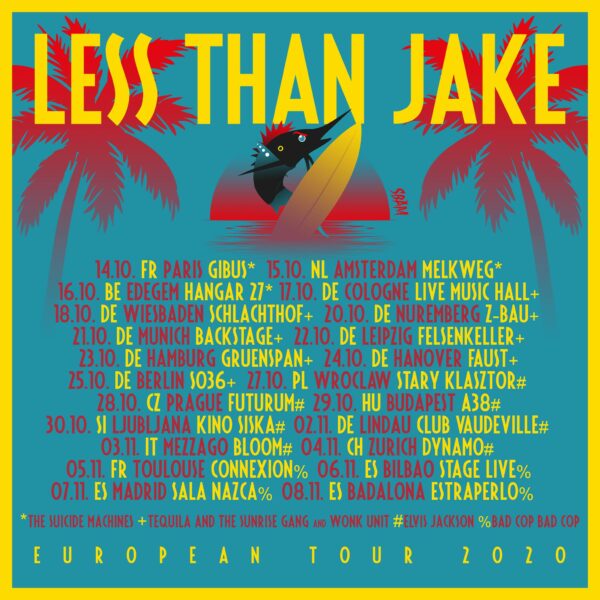 These are gonna be brilliant! Wonk touring with Less Than Jake this October in German. Have heard the Jake and their fam are a fun bunch so these’ll be next level gigs!! So stoked! Thanks to Destiny Tourbooking for the opportunity xxxx 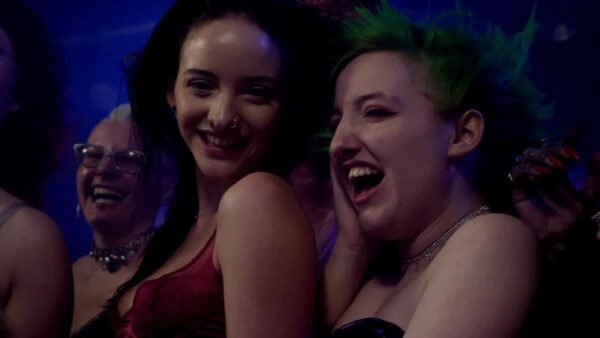 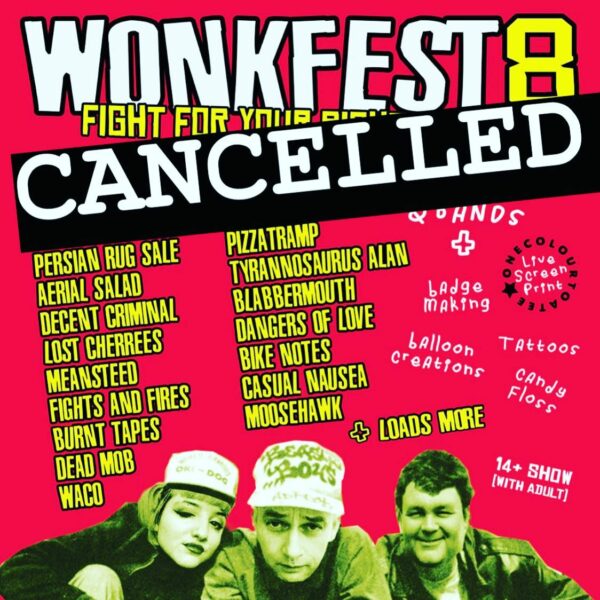 Morning everyone. Ok so here’s the bad news, I gotta pull this years Wonkfest. I’m really really sorry. As you know, Wonkfest is a representation of Wonk Unit’s year, the bands we meet on our travels. Obviously a lot of our travels have been cancelled so meeting bands and arranging the line up hasn’t happened as in the past. About a quarter of our planned line up were due to be in Europe for festival season, not anymore. Everyone is in the same boat with their tours being cancelled. I’m so sorry folks. Tickets will be valid at next years Wonkfest or refunds available from Seetickets. If you have any questions don’t hesitate to message me on Facebook. Alex xxx 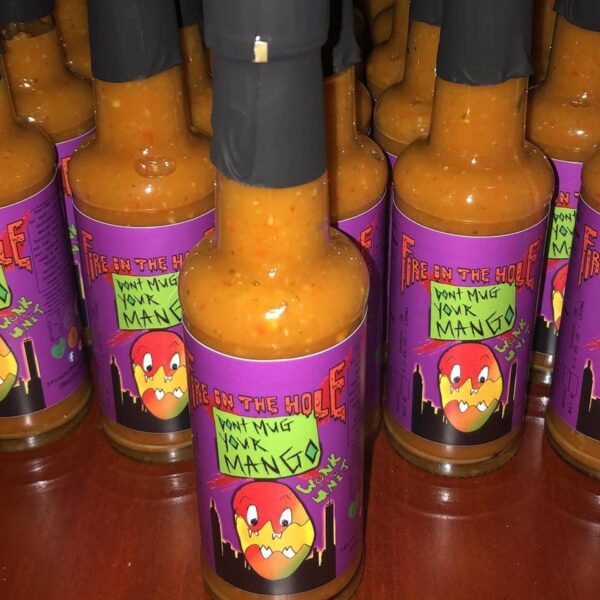 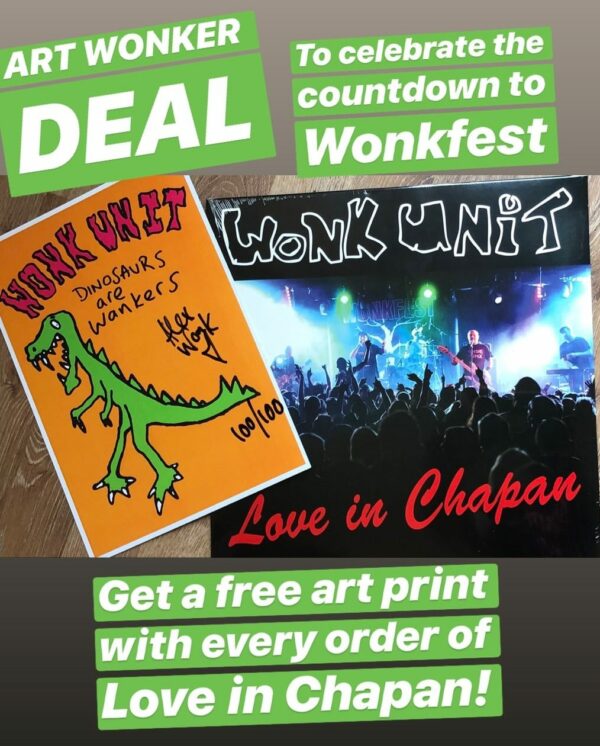 The countdown to Wonkfest 7 begins!!

To celebrate this year’s Wonkfest Grab a copy of Love in Chapan on LP/dvd or Cd /dvd and get a free signed and numbered Art print drawn by Alex himself.

Head over to our merch shop for more details. WHILST STOCKS LAST. This offer ends July 28th.  #wonkfest#wonkunit#art 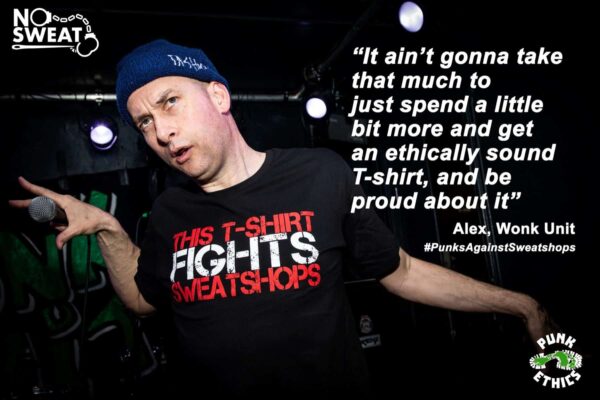 Love J and the No Sweat family. Been doing their bit to make the world a better place since Wonk started.

I’m in no position to preach here, I skate Nike SB and print the majority of our tees on Gildan. However, whenever possible we do use shirts supplied by Punk Ethics and Wonkfest merch is printed exclusively on their ethically sources threads.

Aint a major ballache and genuinely every shirt does make a difference. 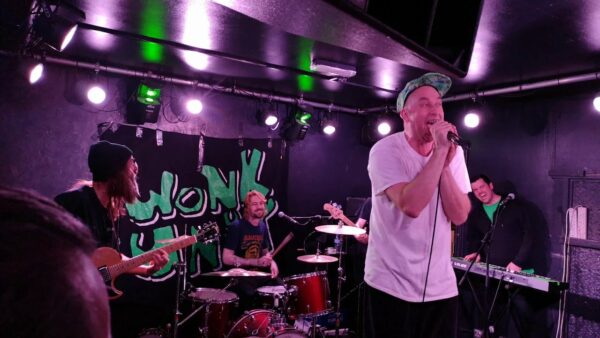 SATURDAY 13th April 2019 = Well this could be the only time you can see Wonk Unit play live with KT Tunstall and Pete Doherty – so head over for a bit of acoustic fun!

“Rough Trade West are proud to welcome a selection of our favourite bands live in-store, for the biggest day of the year. Over 500 exclusive Record Store Day 2019 titles available to buy in store only.” 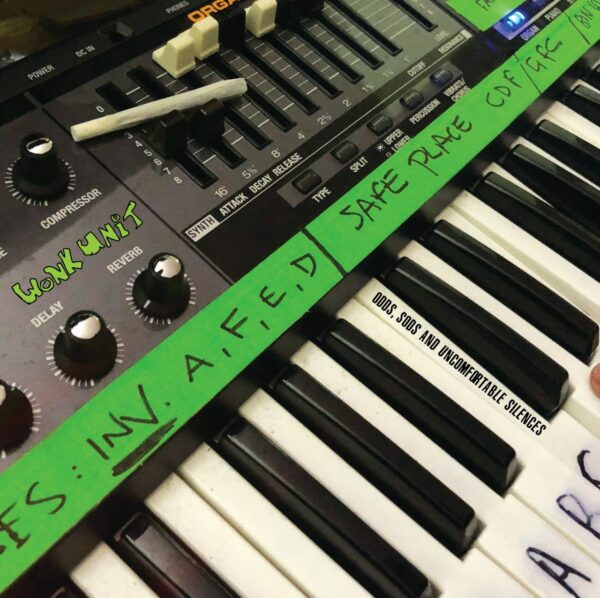 Hot on the heels of the recently released live Wonk Unit album “Love in Chapan” comes … another new album!!   The brand new “Odds, Sods and Uncomfortable Silences” album is about to be released on PINK VINYL.  It’s a collection of never heard songs, unreleased rarities and Wonky oddities for your listening pleasure.

The album is being released exclusively for Record Store Day which is Saturday 13th April.  RSD is for indie stores to have a shot at selling exclusive vinyl before digital/online people get hold of it, so you won’t even be able to get it here until some time after that date, it’s a great way for bands like Wonk Unit to support those great shops still selling music to punks like you!

Now to help spread the word and try and get this record in the shops around the UK for “Record Store Day” on the 13th April, Wonk Unit would love our fans (that’s you that is) to wander into your lovely local independent record shops asap, and ask them if they will be stocking the new RSD exclusive release “Odds, Sods and Uncomfortable Silences” pink vinyl by Wonk Unit.  If they ask more details, you could suggest they can be ordered from Cadiz Music (via Universal) and share these e-mail addresses so they can order copies; [email protected] & [email protected].

I’m sure you all agree it’s time more people got the chance to see and hear a bit of Wonk Unit, and this album could be a nice little starter course, plus we all need to help support our local record stores!

If you want to know more about Record Store Day – and maybe find a local store to visit, check out the RSD website.

Cheers, Krispy aka the Wonk Webmaster for Alex. 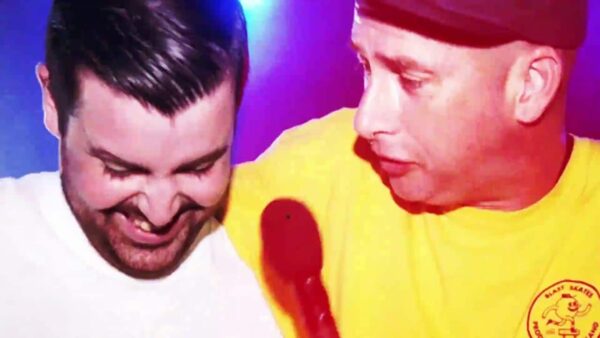 “Love in Chapan” is a live album/dvd of our Wonkfest 2017 set. It’s seriously punk as fuck, serious Wonk energy. The DVD also includes all our videos and commentaries from me and Pwos and even a Rock commentary. It’s awful. 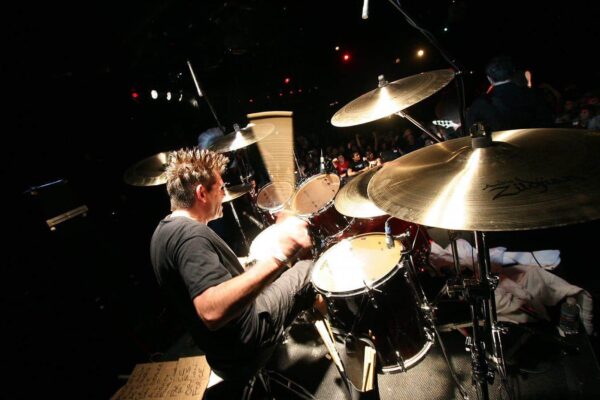 We would officially like to welcome Spike to the Wonk Family – as he is stepping into Tommy’s shoes as the new Wonk drummer!

Spike is a bloody legend in the drumming world – there’s hardly a band he’s not played for, across loads of genres.  He will be an awesome addition to Wonk – and we hope you all welcome him to the family when you come to our shows!  He’s a lovely man too – make sure you say hello. 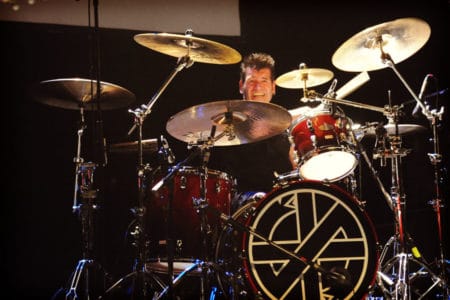 Spike could well be described as the British version of Josh Freese with regards to his varied & colourful drumming career to date. Well known for his work with massively influential singer MORRISSEY, with whom he toured & recorded with between 1999 & 2003.

Gizz Butt, former guitarist of THE PRODIGY & now fronting his own metal band THE MORE I SEE has also had Spike contributing his drumming skills to his bands albums THE UNHOLY FEAST [2008] and the follow up TREAD THE DARKER PATH. This saw the light of day in spring 2010.

There is also plenty of touring both in Europe & America where Spike is an “in demand” player. The summer of 2010 he was stepping in for the mighty KILLING JOKE culminating in their first visit to China headlining the 2nd Inja festival. Time was also spent occupying the drum throne for the legendry NEW YORK DOLLS which once again saw Spike reunited with his old rhythm section brother Gary Day.

September 2010 to November 2011 was spent performing with STEVE IGNORANT (former front man of CRASS) with his live band. The world tour was billed as THE LAST SUPPER. it was to be the one & only time Steve would perform songs by his former band & as such, played sellout shows throughout the UK, across Europe, America & Canada, Australia & New Zealand culminating in the final show at London’s Shepherds Bush Empire. This was also filmed for a live dvd release.

In 2013 & after a four year hiatus Spike is once again going to be performing & touring with CONFLICT with whom he has played since 2006 . There are dates currently being booked for the UK & Europe to keep the band busy until the end of the summer, after which they will return to America & Canada in October for further dates.. their first in 5 years.

On the recording front… DESTROY DC a Band formed By Spike & Gav King of Fields of the Nephilim have just signed a deal with Reverance Records. Their first ep entitled “The Pride of the Asbo Generation” is due for release in March.

In-between all this Spike has taken part in numerous clinics, demonstrating his wide-ranging styles & influences. He also runs his own drum school, recognised as one of the most prestigious schools for aspiring drummers in Cambridgeshire. He has also been the featured artist on the “Pearl Drum Vision” advertisements that have been appearing in all the top drum magazines & will also appear in their forthcoming 108 project video.

Bonjour naughty seahorses! Ok so guess what, we are looking for a new full-time drummer. You need to be in rehearsing distance of London and available to tour (and be prepared to be broke). I also can’t deal with big drinkers or big drug users (because I’m in recovery so bare that in mind before getting in touch.
You’ll get to travel the world, you’ll get to laugh your tits off. You’ll be looked after. You’ll also get paid a bit but best of all you’ll be in a band with Pwosion!!!
We start a huge year of touring in March 2019 so plenty of time to learn the 100 odd songs we play. We are an incredibly serious band but we don’t take ourselves as people seriously ya get me.
Being in Wonk is genuinely the best thing in the world. Look forward to meeting you! Get in touch.

My time with wonk unit has come to an end! Perfectly amicable, and still friends! Going to dedicate my time to other things, like following wonk unit around and heckling them from the front

? But seriously, it’s been brilliant and iv’e had a great time, and wish the band the best of luck in the future! Some things just naturally come to an end I guess! See you at all the punk gigs starting with Jeff Rosenstock this Thursday 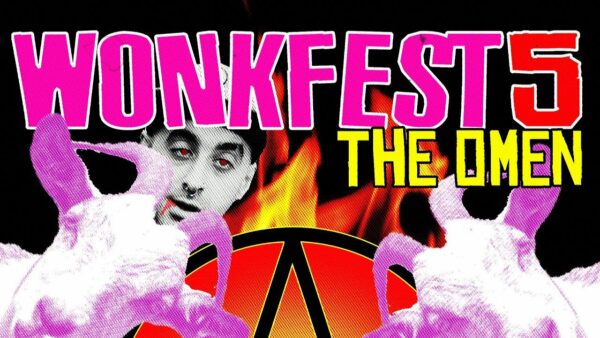 It must be nearly time for the next installment of London’s biggest DIY Punk party, the amazing show which is WONKFEST!

So prepare your ears with this amazing 1.5 hour choice video cut of last year’s Wonkfest, put together by the amazing Mark Richards. 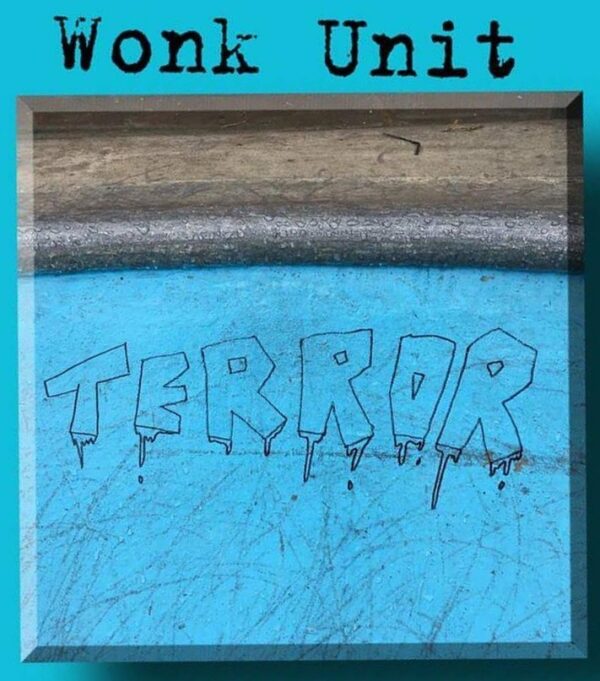 ATTENTION WONK UNIT FAM!! TERROR CD PRE – ORDER! Gotta get some dosh together real urgent to pay for the last month of mixing, mastering and production of our new album Terror which gets released April 20th.

PRE ORDER the CD now and you’ll get it as soon as it arrives at Plasterer HQ (i reckon at least a week in advance of release date).

This is for CD only (LP coming in June). Paypal £11.50 (uk) £13 (EU mainland) £15 (rest of world) to [email protected] Send friends/fam payment option. Include address and “terror pre order” in Paypal note.
Thanks my dudes! Very excited for you to hear the record!

We’ve been very busy (well office Wonk Krispy has, along with our friends at Cadiz music) – the shop has been given a right royal overhaul.

You might notice we’ve updated most of the images too – recognise the two models at all?

Get your grubby mitts on the merch here. 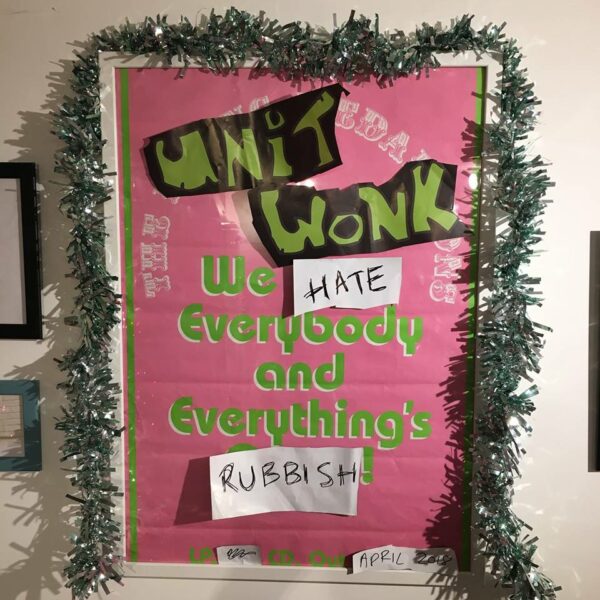 We’ve got so many fantastic new songs we just had to release ANOTHER new album.  Alex woke up this morning, and suddenly the name has come to him, like the baby Jesus but no manger.

In a nod to his old band Flying Medallions…. “We Hate Everybody and Everything is Rubbish!”

Of course a new album needs a new tour, so come and join the great bunch of lads who are touring with The Raging Nathans from the good old US of A!   Bangers guaranteed! 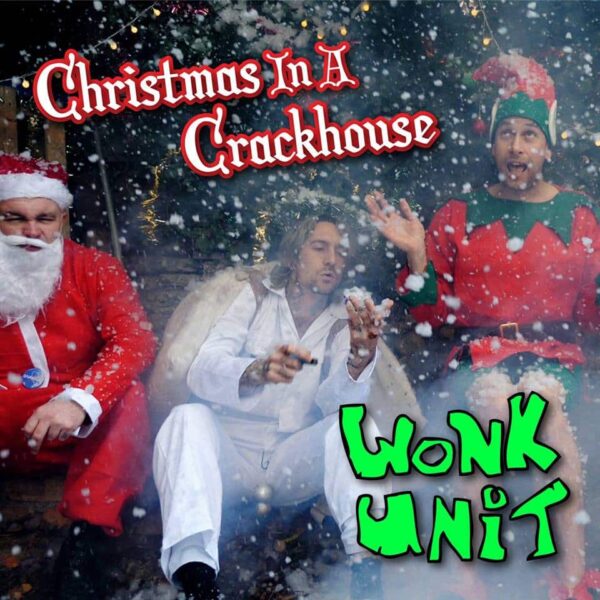 We got a new album coming! Christmas in a crackhouse should be ready for April release.
The Raging Nathans are our family from over the pond. We’ll be showing them the delights of the UK as they did for us in the USA.  Following that we will be heading into mainland Europe with the Murderburgers.