Aerial Salad are now handling sales direct as they have their own brand new website!  Click button below to take you to their shop page.

Available to pre-order to ensure your copy NOW, Aerial Salads new album “Dirt Mall” will be on general release on April 10th, 2020.

Released on vinyl in two formats; 200 numbered copies in dark blue signed by band and 300 in traditional black.   Each copy will come with included CD copy for your digital pleasure.

The band have grown in stature since their initial Roach release, and have become one of the hottest tickets in the UK DIY Punk scene…

“”the album was written between July 2018 and April 2019, and it captutes everything I’ve seen working as a temp in offices and generally being in my 20s trying to work my self and the world out. With some pop songs thrown in for fun.”   – JAMIE MONROE, Aerial Salad 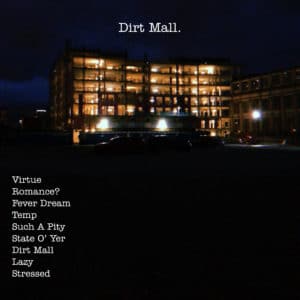 There are no reviews yet.

Use our Paypal shop to buy your merch and lovely music items direct from Wonk Unit – your stuff will be sent by Alex himself!

Please allow up to four weeks delivery, as the band can be busy gigging around the UK or even further abroad. We will obviously try and be a lot quicker than that!

Some items are UK postage inclusive, others will show postage charges.  EU and ROW postage will be displayed on checkout.