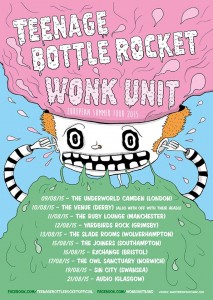 Wonk Unit continue to support Teenage Bottlerocket on their UK tour, with a gig at the Exchange in Bristol.

Room: Main Room
Entry Requirements: 14+ (Under 18s must be accompanied by an adult)

Formed by twin brothers Ray and Brandon Carlisle, following the dissolution of their previous band, Homeless Wonders, in 2000. Their music is heavily influenced by co-singer/guitarist Kody Templeman’s other band, The Lillingtons, and punk rock acts such as Screeching Weasel, The Ramones, Bouncing Souls, and Misfits. In 2012 the band signed to Fat Wreck Chords and toured with bands including NOFX and Descendents.