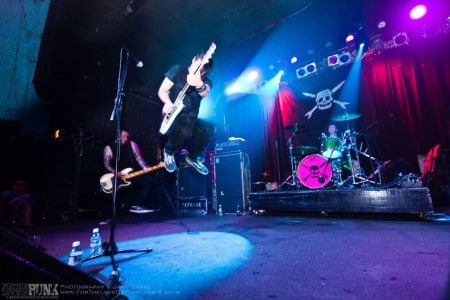 You probably know this much already: Teenage Bottlerocket (or simply “TBR” to their fans) is currently one of the hottest bands in punk rock and their new record, They Came From The Shadows, is highly-anticipated. But before we go any further you should probably know that they’re from Wyoming. Crazy, huh? Although more famous for its frontier forts and characters like Butch Cassidy, the “Front Range” (as it’s known to the locals) may very well be the unlikely home to the next great punk rock band. At least that’s what the kids are sayin’. But don’t take our word for it, even Alternative Press featured them as a “Band You Need To Know in 2009”… and they don’t even have those Jennifer Aniston haircuts!

What will surely follow the release of their Fat Wreck debut is a bevy of touring. They’ve been to Europe multiple times, so you know they’ll be back in short order; and already booked is their first tour of Japan. Also lined up is a 2-month tour of North America this Fall with Reno’s Cobra Skulls playing support. That massive odyssey will take them all over the land and have them playing shows with The Lawrence Arms and Dead Milkmen. When Teenage Bottlerocket mobilizes their band, they go all out and truly bring it. Such is their approach to songwriting, live shows, recording, and even partying on tour.

Few things are more exciting than a young band with a great new record on a new label. Their booming, seemingly-sudden popularity is reminiscent of bands like Against Me! and Gaslight Anthem, so who knows what to expect next from these upstarts. If their unhinged live show is any indication, it won’t be for lack of trying. So stay tuned and expect nothing but continued success from these punk rock bandits. They’re certain to make Wyoming proud.