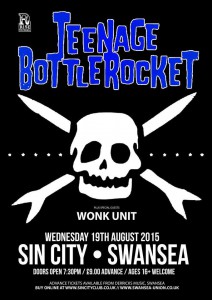 Sin City are proud to announce….

Their beginnings are as humble as they come. Three friends (two of them being identical twin brothers) wanted to start a fresh, no-bullshit punk band that defied—if not openly mocked—the corny emo groups that were pervading malls, mainstream, and MySpace. They took the spirit of Midwest bands like Alkaline Trio and Dillinger Four and added the earnest sensibilities of the Ramones. It made for such an undeniably likable combination that other bands were asking themselves, “Why didn’t we think of that?” Not long after their forming, they doubled their number of vocalists and were joined by Kody, a fellow Wyoman and frontman of the beloved Lillingtons. With a solidified four-piece lineup they did a bunch of touring and two studio full lengths with Chicago label, Red Scare Industries. At this point things were happening fast for the young punks from the Cowboy State, and after playing shows with bands like the Queers, NOFX, The Falcon, and Dead To Me, they were snatched up by Fat Wreck Chords. And that’s where Teenage Bottlerocket is today. Oh, if you must know the truth, the band takes it’s name from an old spray-painted jalopy that used to cruise the streets of their hometown. Much of the time spent in those early days revolved around goofing off and carefree skateboarding, and that fun spirit is still reflected in their music today.