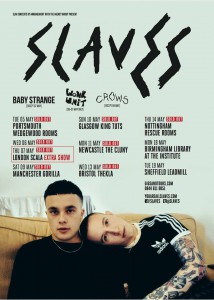 Wonk Unit are supporting the fantastic SLAVES in two back to back gigs at Scala in London.

Fresh off the back of their 2015 NME Tour dates, two-piece punk provocateurs, Slaves are set to bring their personal brand of live music mayhem to headline shows across the UK in May.

Hotly tipped across the board by everyone from the rock press to the broadsheets, the sharply dressed duo have been earning a formidable live rep for themselves, both with their own, chaotic shows, and supporting Interpol on their recent London dates (after being handpicked by the New Yorkers themselves).

Live, The band display a madcap sense of humour, and this has found its way into their songwriting as one listen to, new single, ‘Feed the Mantaray’ (not to mention the anarchic video) will prove. The song is the third track to be released from their up-coming, debut album ‘Are you Satisfied’, a high energy slab of contemporary punk, shot through with an outsider spirit and the pairs unique lyrics looking at life in 21st century Britain.