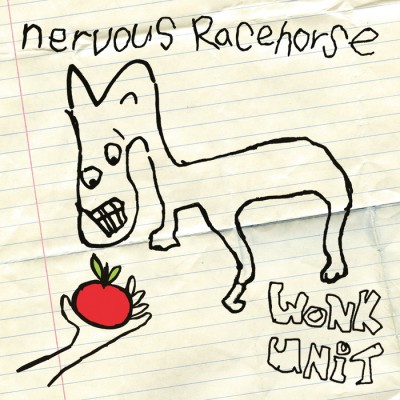 The fourth full-length from ex-Flying Medallions vocalist, Alex Brindle Johnson’s poetry and performance art project, Wonk Unit. ‘Nervous Racehorse’ begins with an acoustic and organ infused lament of a bricklayer looking out to world of unattainable beauty. This rolls into an almost perfectly formed punk rock classic, ‘Lewisham’, about the old days getting wasted in Lewisham. This is where we get a taste of Wonk Unit as a punk band, a very good punk band that has the art of writing actual punk rock songs down to a t, but there is so much more to this project than the punk sound. Track 3 is called ‘Nan’, it’s most closely identifiable as old school hardcore and the lyrics are “Nan is old, pisses with the door open, scowls at my friends, laughs when her grandson gives her a hug, spills milk on the floor, woo hoo”, adapted from one of Alex’s poems. It’s fucking banging, much like later in the album with another hardcore number ‘Depressed?’, the lyrics for which are entirely “I’ll show you fucking depressed!”.

Track 4 is ‘Go Easy’ which is about the drinking habits of one of the many absolute devotees of Wonk Unit, Teddy Fourlegs. I unfortunately missed the Wonk Unit release show the other night for work, but I bumped into Fourlegs in Camden after the gig and I might suggest the massive banger that is ‘Go Easy’ has yet to convince Teddy to “go easy”.

‘Siobhan’ is just a total curveball. The organs and Alex’s voice at the beginning are quite beautiful. It breaks into a country and western song, really catchy and quite melancholy. The rest of the record is kind of a mix of these awesome first five songs. It’s not only how awesome those first five songs are but the way they role into each other, like everything with Wonk Unit (and Alex’s solo project, The Mighty Couger) it’s a part of a bigger piece, everything working in relation with each other, everything connected, from their incredible Microsoft Paint art work to Alex’s sex manual to the cult of Pwosion, bassist in Wonk Unit. The beginning of the record reminded me of hearing the first King Blues album, the way it rolled from that ukulele intro into ‘Under The Fog’.

‘Kings Road Sporting Heroes’ is a nasty piece of work about nasty pieces of work. ‘The Trail (French Booty Song)’ is about an arse so lovely, Alex would follow it “down a massive mine shaft”. The song is in the context of a flirtatious conversation between Alex and a fictitious French lady, although on first listen I did wonder if it was about street harassment. Context is important with so much of Wonk Unit because the humor can so often be ironic or satirical.

So much of this album reminds me of Snuff, the organs and horns. It’s great British pop-punk that plays with other genres, just like Snuff. The final track, a heart-breaking ode to lost friends, is called ‘Take Me Home’, surely a nod to Snuff.

This album is a genuinely strong piece of work, fun, energetic, thought provoking, angry, hilarious, exciting, catchy as fuck. Clearly the combination of tens of years of experience and effort from all members of the current line up of Wonk Unit. Well done those men.